Pictured above: Dan Tasse, software engineer and researcher in the field of Human Computer Interaction. He worked for Google, no big deal! He studied a PhD at Carnegie Mellon University in HCI (we’ll let him explain what that is) and rightly suggests that, along with all those important classes like Maths, you take some time to enjoy the fun things, too…

What is your field of work/ study?

Human-Computer Interaction (HCI). It’s kind of a hybrid of Computer Science, Design, and Psychology. How do humans use computers, and how can we make that better?

I’m an early-stage PhD student, so my job involves three things: doing research, taking classes, and teaching classes. Research is the most important, and it includes deciding what to study (reading a lot), gathering data to help us study it, analysing the data, and writing papers about what we found. Those are all kind of vague, especially “gathering data.” This can be anything from downloading a bunch of Tweets to running user studies on people in our lab to interviewing people to developing new apps and testing them out. HCI is a pretty broad field, so we have to be able to do a lot of things.

In my research in particular, I’m trying to use social media (tweets, instagram photos, foursquare checkins) with latitude/longitude coordinates to tell something about how groups of people move around a city. So, gathering tweets, making maps, some statistics and geographic data processing.

When did you decide to pursue a career in Human-Computer Interaction?

I was a software engineer for a while, and I liked it, but I felt like what I was doing was a bit repetitive. I liked programming, but I was a bit down on computer science in general, because so much of it seemed like just making things faster and processing more and more data. But I got in touch with some students at the University of Washington working on a project called Open Data Kit that was being deployed in developing countries to help their data gathering needs, and I thought, cool, you can invent new things and make a real impact doing research in this strange new field called HCI. 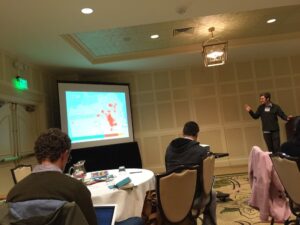 What were your favourite subjects in secondary school? What did you study at university?

In high school, honestly, history, because my teacher freshman (IGCSE) and junior (A Level) year was amazing. World Religions and AP (A Level) English for the same reason. Math was ok. I always liked Math, I just didn’t like Math class, because my teacher was out to lunch. (Figuratively, usually.) I went to a nearby college to take programming 101, and that was pretty neat too.

University: computer science. I had a friend, Bill, from high school. We played trombone in marching band. He went to Carnegie Mellon U for Computer Science, and told me about it. I visited him, he showed me some of his assignments, I thought it was really cool. I figured I’d try it and I could always transfer to a different major later. But I liked it well enough the whole time that I just stuck with it. (Which turned out lucky, because with a CS degree you can pretty much do anything these days, and also always have a job).

Who are your personal heroes?

Do you have any advice for young students who might want to pursue a similar career?

At university, do three things:

Major in computer science (if you even kinda like it); it seems a very future-proof major if you always want to have a job, and it helps you think computationally, which is a good skill.

Get involved with someone at your university who’s doing research. Then, go to grad school* if (and only if!) you totally love the research work style. There’s almost no reason to do research unless you love it – you can make a lot of money, and a lot of impact, just by working for a company, or maybe even trying to start one. N.B. *postgrad, for those of us in the UK!

Keep your work focused, but your life broad. Work towards one goal (one major/career), but do lots of different things for fun. Get to know different kinds of people. Do some arts and some sports and some whatever else you like. Because HCI is so broad, there’s a good chance that many of the sides of your life will all come in handy. (More importantly, they may be fun.)

One response to “Want a career in Human Computer Interaction?”