We all know how important it is to keep your brain active through all the different stages of our lives.

We were therefore delighted to find this letter, submitted by a Wolsey Hall Oxford student in 1969, detailing her experience taking ‘O’ level Italian: the hardest part, she writes, ‘was learning to learn again’. It appeared in a newsletter that year – scroll down for a photo of the original document!

‘I was becoming a 27 year-old Cabbage’

One day I found myself talking to a friend about the merits of washing-up liquids and for one awful moment I realised I was becoming – if I had not already become – an echo of one of those blinding white TV advertisements. Next, I thought, it will be margarine and I shall be bounding through daisy-covered meadows surrounded by chubby children full of cereals and baby foods.

That was a year ago – and when I asked my husband if he thought I was becoming a cabbage, his non-committal mumble convinced me that I must find something else to think about other than babies if I wished to emerge from my tunnel of ‘baby’ love with a mind that still functioned above vegetable norm.

I am 27 with an engineer husband, two babies, a mortgaged Victorian villa, and an irritable Highland terrier – a very average B/C socio-econ. housewife steeped in TV and frozen foods. Before my married bliss, I was a student teacher having already absorbed through ‘O’ and ‘A’ levels an affection for learning, so it was a natural step, that I should decide to whet my mind on learning something new. This time, however, I decide I could learn for pleasure. No need to take some awesome examination at the end if I did not feel like it – instead, I could potter, and perhaps learn something at the same time.

I decided on ‘O’ level Italian. My reasons for making this decision were probably all wrong, but entranced on my few holidays to Italy by the sound of their language, I thought I should like to learn to speak it – and I am now immersed not only in soap suds to the elbows, but in irregular verbs as well. It was not easy at first, but I feel that I am now over the hardest part which was learning to learn again.

I still talk about detergents and I am still sure I bore my husband with my hazards at the launderette, but on my last visit to an Italian restaurant I was able to understand wha the waiters were talking about, and next year I have no doubt that I shall be able to start showing off my Italian in front of my family.

No Longer a Prison

Now that I have progressed so far, studying sometimes in the evening, and sometimes when the screams subside during the day, I realise that I have found a kind of mental trap-door which allows me to escape from both nursery and kitchen and has had the beneficial effect that I no longer feel that I am becoming ossified.

When the babies grow a little older (they are only two and four), and I can go out more I may find my increased freedom will lessen my determination to study – but I hope not. I am gaining a grounding in a language I would some day like to be able to speak, and with two or three years of study behind me I think I shall be able to achieve this. What does my husband think? His original scpeticism turned, after about six months, to faint tolerance and now he is becoming interested himself. But whether he feels inspired to follow my example or not, at least I know that the past year has agreeably mixed the blessings of babies with an outside interest.

Whatever your age or location, we’d love to hear from you if you too would like to keep your brain active with a distance learning course. Why not check out our IGCSE and A Level courses? 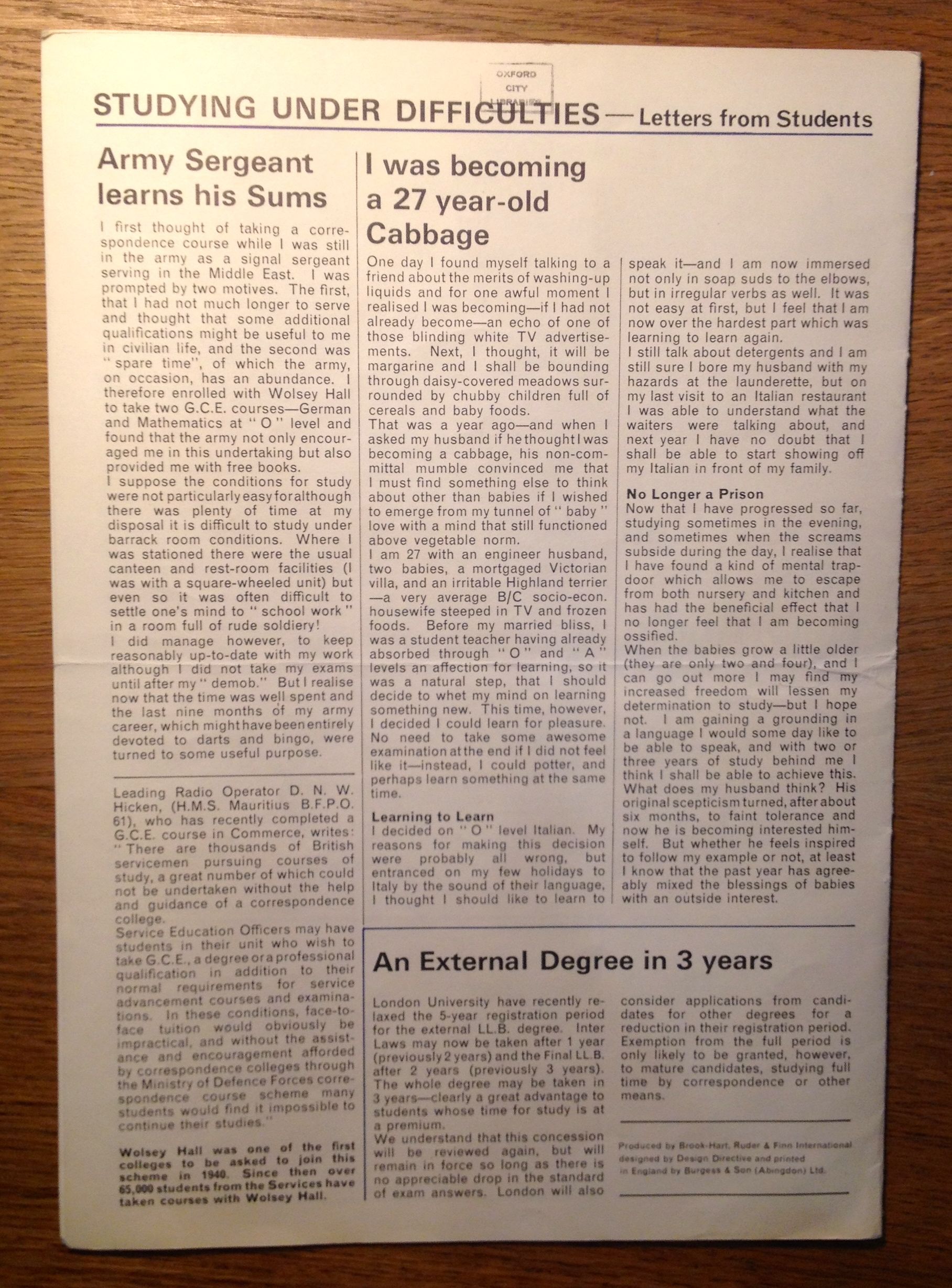 From a 1969 Wolsey Hall newsletter